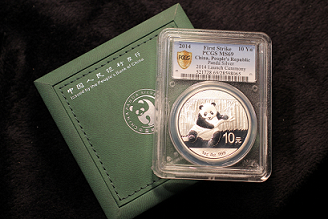 PCGS also was the first to certify in China one of the first 200 of the new 2014 China silver Panda coins struck at the Shenzhen Guobao Mint on October 11, 2013.  It was presented by mint officials as a gift to Ms. Muriel Eymery, PCGS Vice President of International Business Development, who was present at the striking ceremony.  On October 13, less than 48 hours after it was presented, the beautiful coin was certified at the PCGSShanghaiSubmissionCenter as First Strike, PCGS MS 69 Secure.

The designer of the 2014 silver Panda, Mr. Rocky Zhou, met Eymery and PCGS Co-Founder and Collectors Universe, Inc. President, Mr. David Hall, while they were in Beijing.

The important expansion to year-round grading services in China underscores the increasing demand for PCGS-certified coins there, according to Mr. Don Willis, PCGS President.

"About 200 collectors signed up for the PCGS Chinese Set Registry during the recent Beijing International Coin Exposition, and submissions from PCGS Authorized Dealers and Collector's Club members in mainland China have been exceptionally strong since we launched on-site grading in mainland China on July 20, 2013," said Mr. Willis.

"So, we are now grading modern Chinese coins dated after 1979 on a year-round basis, and will continue to provide on-site grading of vintage Chinese coins four-times-a-year."

PCGS officials also have announced another important benefit for collectors and dealers.

"In recognition of the diverse variety of modern Chinese coins made for circulation, all such coins certified by PCGS will now include a reference designation on the holder insert label with the corresponding reference number in the Modern Chinese Circulating Coins Catalogue authored by well-respected numismatist, Mr. Sun Keqin," explained Ms. Muriel Eymery, PCGS Vice President of International Business Development.

Coins conveniently can be submitted in mainland China at the PCGS Submission Centers in Beijing, Guangzhou and Shanghai in person or by mail, or submitted through a network of more than 80 PCGS Authorized Dealers in mainland China (http://www.PCGS.com.cn/dealers).