The Paris Submission Center of Professional Coin Grading Service (www.PCGSEurope.com) has authenticated, graded and certified its first examples of the two recently reported varieties of British 2014 silver £2 Britannia and Year of the Horse "mule" error coins.

The PCGS Glossary (www.PCGS.com/lingo) defines a numismatic mule as "a rare mint error where the obverse die is of one coin and the reverse die is of another coin." One variety of the recent Royal Mint mules is the £2 Britannia obverse design with denticles that was struck with the no-denticles reverse design intended for the 2014 Year of the Horse Lunar New Year commemorative.  PCGS certified 461 of them during the recent PCGS Paris Grading Week, March 10 - 14, 2014.

The other variety is the no-denticles obverse of the Year of the Horse struck with the denticles reverse design intended for the £2 Britannia.  PCGS certified 22 of them in Paris.

Denticles are the tooth-like motif sometimes used as a design element around the inside rim of a coin.

The one-ounce, .999 fine silver bullion coins were submitted to PCGS by The London Coin Company of London, England in conjunction with the PCGS Paris Grading Week, March 10 - 14, 2014.

Ingram Liberman, President of The London Coin Company, said one of his customers first alerted him to the existence of the varieties.

"Back in late December 2013 or early January 2014 we had a call from one of our clients explaining he had purchased a 2014 Britannia £2 silver one-ounce coin and he wanted to return it.  He said it did not look like the picture of the coin he had purchased, and he thought the coin was a fake." 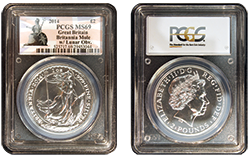 After Liberman discussed the appearance of the coin with the client "the buyer quickly realized that, in fact, he had bought a £2 Britannia mule from us and wanted to hold onto it and to his collection.  He appreciated our honesty and integrity,"Liberman explained.

"We chose PCGS to certify our coins because they are the strictest and most accurate authentication and grading company in the world with an internationally recognized reputation.  PCGS certification for coins is like GIA certification for diamonds: the leader in the industry," stated Liberman, a PCGS Authorized Dealer.

"It's always exciting to see a new coin variety in person for the first time, and these beautiful coins did not disappoint. These types of errors are highly sought after by collectors and already are bringing extremely steep prices.  They are true British numismatic pieces of history," said Muriel Eymery, PCGS Vice President of International Business Development.

For additional information about PCGS services in Europe go to www.PCGSEurope.com.